Our renewable future: favoring the next disruptive technologies 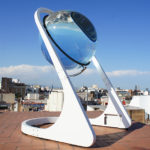 We all agree on the necessity to switch to renewable energy sources. It will ensure energy security and climate change mitigation.

But a remaining question is to know what is the best power source option. There no good answer in that it really depends on several factors and even experts don’t share a common view.

The main factor to consider is certainly “where are you?”:

Some parts of the U.S. are windier than others, some are sunnier, and some have better access to hydroelectricity or geothermal resources…. You get the point. – Kate Gordon

It is in accordance with the increasing need of distributed energy (see here for the U.K.).

Distributed energy infrastructure requires the use of disruptive technologies that are able to locally enhance efficiency and energy storage.

We are reaching some point where we will be required to pool resources. Not only to bring power to the developing world in a shared effort but also for optimizing energy distribution and allowing energy independency for both some legal entities at the top level and cities or districts at the lowest level.

Besides, the next electricity infrastructure will be far more resilient and be optimized in term of energy consumption. But the quest for energy optimization raised a concern about privacy. Smart meters are considered as a threat for privacy. GCHQ were forced to intervene because of insecure design. They are also pretty talkative: it is even possible to know what are your favorite TV shows.

Now, I’d like to say a few words on something new which have potential for revolutionizing the world.

I am convinced that blockchain is crucial for developing efficient locally distributed networks (see an initiative here). However, blockchain currently comes at a cost: it consumes a lot of power. But it could easily be tackled by well-optimized A.I. algorithms running on well-suited chips.

Besides the fact that research on every renewable energy sources should be favored to ensure resilience and adequate distribution, we have to develop better technologies, disruptive ones.

I will present you some initiatives that look promising. Secondly, Chinese people have developed solar panels that work 24/7 (at least if it rains).

These two technologies are destined for a bright future. Especially since PV prices will keep dropping.

Hydropower and wave power… are some competitive sources

Harnessing marine current through its kinetic energy looks promising  since there are strong ocean currents.

A 2006 report from US department of Interior estimates that capturing just 1/1,000th of the available energy from the Gulf Stream would supply Florida with 35% of its electrical needs. – Wikipedia

EDF estimates that marine current power could generate up to 12,5 GW in Europe. It is equal to the energy that we can get from 14 nuclear reactors.

There are innovative open-ﬂow devices just like this one were central rotor is the only moving part:

It was invented by EDF and DCNS in France.

In order to both limiting impact on animals, sediments and plants & functioning even at low currents some initiatives were proposed. Like open-ﬂow devices such as fish-friendly turbines in rivers.

I find this other one really interesting. It functions by converting the wave power and it is inspired by eels (an example of biomimetics) and is experimented in cooperation with ifremer… Its energy efficiency is really high and it works at low currents. As you may see there are plenty of disruptive technologies that can help us. Such technologies are more than necessary. They are of public interest. That is why both R&D and their use must be encouraged.

However technology is only a mean among many others. We also need a global awareness of the effets our habits have and public policies have an essential role to play.

Your brain does process information but it is not a computer 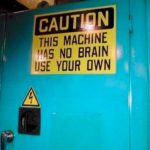 I recently came across an article pretending that your brain “does not process information, retrieve knowledge or store memories” and cannot be viewed as a computer.

I personally think that this assertion is fundamentally wrong regarding the information processing.

The computer metaphor is still a valid one

First, I’d like to show you that the computer metaphor couldn’t be discarded so easily.

Of course our brain is not a computer. It is embodied and cannot be considered as an autonomous system. “Many features of cognition are embodied in that they are deeply dependent upon characteristics of the physical body of an agent” – RA Wilson and L Foglia, Embodied Cognition in The Stanford Encyclopedia of Philosophy

A downloaded brain, if it were possible, would probably not be able to function without a body having human-like sensors and effectors… since a lot of brain activity is dedicated to monitoring sensory inputs, regulating and interacting with the environment.

A system which is itself made up of of multiple systems

Rather than, the brain should be considered as multiples systems that interact together as a whole. Each of them is specialized and is able to communicate with others through different means. The basic elements of those systems are able to transmit signals at different speed, through different pathways: electrical signaling, chemical signaling (neurohormone)… even by using important diffuse systems (glia and immune system).

To put in a nutshell,

“Humans, along with other organisms with brains, differ from computers because they are driven by emotions and motivations. The brain is much too hot and wet to be represented by a computer. The brain is electrical, but it is also driven by fluids (blood) and chemicals (hormones and neurotransmitters). Most importantly, the brain is part of a body which it drives to action, and research from an embodiment perspective also shows that the whole body (not just the brain) affects emotion, motivation, and other psychological processes.”

So what is the adequate metaphor?

“So, how can we replace the computer metaphor with a metaphor that more accurately represents the brain of an emotion-driven, motivated organism such as a human? I like the metaphor of a car.

A car may have a computer on board, and may be able to process information. But it is driven by fluids (gasoline, oil, etc.). It is both electrical and mechanical, and it can move.”

Despite the fact that computers can be so complex using most recent advances (for instance VLSI or, simply supercomputers), the car metaphor is far more comprehensible.

We should also consider that computers have no significance if not considered through human perspective. On the contrary, all beings those have a brain exists by themselves.

But a useful metaphor

The metaphor of a brain as a computer helped scientists to gain a better understanding of our brain functioning. No more, no less. Just like both past metaphors of the brain and current ones.

Cognitivism (top down approach), connectionism (bottom up approach) and embodied cognition all succeed at explaining or modeling some aspects of our cognition. In neuroscience, several approaches contribute to explain the neural substrate functioning.

The working memory model , as well as the second revolution in linguistics, etc. were all useful for gaining a better knowledge. A knowledge that is helpful to evaluate individual’s cognitive aspects, model functions and, somehow, understand how the brain works.

These theories are still useful for natural language processing, cognitive remediation, and so on. We haven’t discarded Newtonian theory when Einstein published his general relativity. So is the computer metaphor.

The metaphor is helpful to explore the brain and to exploit its properties but it is not necessarily the ultimate metaphor. Nobody knows what the future has in store…

The brain is not able to recall a detailed picture you saw thousands times (a bank note for instance). That does not mean that it doesn’t store information.

As far as we know the brain stores information using synaptic plasticity (1, 2), i.e. connectivity changes, and brain network topology. The information is scattered through the brain and can be unlearned or mixed with new pieces of information.

What we exactly store is still on debate but it is synthetized and segmented information.

Actually, our brain does process information:

Which is exactly what the brain does.

To go further in this explanation:

“Information is an abstract concept. There is a temptation to think of information as fully representable by the bits used in a digital computer. However with signals, the timing of the signal makes a difference. When precisely a signal arrives at a neuron carries information about what the signal means, and there is increasing evidence that the relative timing among neural signals carries information as well. The brain accomplishes information processing using signal processing, but there is more going on than the phrase “information processing” alone would suggest. […]All signal processing is carried out by the spontaneous “random” interactions of molecular collisions, which are loosely guided by the continuously hierarchical structural form of the brain.” – Paul King, Computational Neuroscientist, Data Scientist, Technology Entrepreneur

What is your opinion on the question?