Do we live in a discrete world? 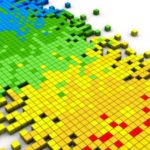 Today, I will share with you some recent thoughts I had.

Do you remember of analog chips (a.k.a linear integrated circuits)? These circuits are almost no longer in use and have been replaced by semi-conductors and discrete processing chips (digital ones). Some kind of analog signal processing still remains in use in vacuum tubes and may be soon integrated in some current devices thanks to recent improvements.

To sum up, we have the following kind of computers: analog, digital, quantum.

The ubiquitous type is digital computer (even your smartwatch is basically a computer). Analog almost disappeared (they are still in use in aircrafts) but may become more prominent due to interest in very-large-scale integration. Quantum ones are more theoretical than common.

I already mentioned that our universe behaviour is either mathematical or a quantum, perhaps both.

Nick Boström even suggested that we are most likely living in a computer simulation.  Some go further, hypothesizing in a thought experiment, that some of us may be p-zombies. The real nature of our universe is a prolific question in physics, philosophy, metaphysics, spirituality and even cognitive science since we extensively rely on our sensors and the perception of a physical world (a perception that is easily tricked, even at integration levels).

What if our universe were discrete?

The discrete option is really interesting in that it supports the metaphor of a computer and, ultimately, of a simulation. It is theorized in digital physics.

One can notice that if the universe processes information, then it can also generate and process knowledge. We know that information and knowledge spread in societies by well-known social processes and networks dynamics. Oriented and labelled graphs can organize knowledge just like ontologies in information science. I found the analogy quite interesting since both societies and ontology-based systems in computer science can generate knowledge. In my humble opinion, it tends to extend the computer metaphor from the universe to societies: the same process underpinning the quantum level, the cognitive level and the social level. It explains why discrete graph models succeed to explain some levels’ information processing (1, 2). Information processing would be the essential nature of the universe and knowledge discovery (perhaps?) a goal for us. Enaction and embodiment taught us that this appropriation of knowledge is not necessarily academic but can be achieved from everyday life or manual work.

It also reminds me the Plato’s theory of Forms (and its limitations) and how to access the ultimate reality.

“We come here to a difficulty which has troubled many philosophic theologians. Only the contingent world, the world in space and time, can have been created; but this is the every-day world which has been condemned as illusory and also bad. Therefore the Creator, it would seem, created only illusion and evil. Some Gnostics were so consistent as to adopt this view; but in Plato the difficulty is still below the surface, and he seems, in the Republic, to have never become aware of it.”- Bertrand Russel, philosopher (sorry for the mention of a Creator, you can replace it by every concept that suits your beliefs).

What is the intermediate level: human being. As you may already know, fractals are everywhere in our universe. The information processing is everywhere. So, it sounds interesting to explore the possibility that the same processes can be observed at all levels: from atoms to societies.

The point is that if our universe is discrete, then each level is discrete too.

Societies are discrete in the sense that information processing and knowledge spreading occurs temporarily by discrete steps. The processing speed is increased in our connected society.

Our brain is also discrete (a counterintuitive idea): from post synaptic potential triggering to time slices of perception as we recently discovered.

What about the quantum level?

Humanity might never be able to prove with certainty whether the universe is simulated, Chalmers said.

“You’re not going to get proof that we’re not in a simulation, because any evidence that we get could be simulated.” – David Chalmers, Professor of Philosophy and Director of the Centre for Consciousness at the Australian National University

But we have evidences for a simulation since universe has probably error correcting codes, just like in computer science.

“Error-correcting codes are what make browsers work, so why were they in the equations that I was studying about quarks, and leptons, and supersymmetry? […] That’s what brought me to this very stark realization that I could no longer say that people like Max [Tegmark] are crazy.” – James Gates, a physicist at the University of Maryland

We may also be able to prove that our universe is discrete by nature. The question is, ultimately: is there a smallest unit of length, beyond which you can’t divide any further?

It will probably be possible to confirm soon Giovanni Amelino-Camelia observations of Hubble’s quasar shift in high frequencies.

We should even not be required to deeply observe the universe since discrete and continuous may be two sides of the same!

“The most significant level of interaction is when one and the same phenomenon appears
in both the continuous and discrete setting. In such cases, intuition and insight gained from
considering one of these may be extremely useful in the other.” – László Lovász, Microsoft Research

If all the phenomenons we observe can be modelled (and perfectly predicted) in both discrete and continuous mathematics then we are justified to ask whether the universe is discrete rather than continuous (due to the low possibility that discrete succeed at modelling every essential phenomenons).