Some hints for a mathematical world 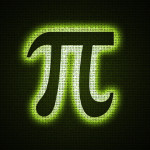 Max Tegmark, a cosmologist, considers the external reality to be essentially mathematical. A link between quantum physics and mathematics

I personally believe in the power of loop quantum gravity, combined to the idea that physical laws are reducible to a quantum circuit.

Therefore the universe may exhibit fundamental mathematical properties inherent in the quantum circuit’ subroutine “archetype”. That’s it for the theoretical digression.

If the universe has fundamental mathematical properties then we must be able to find similar patterns in formulas.

And that is the case: researchers found the same formula in quantum mechanical calculations of the energy levels of a hydrogen atom as in the derived formula for pi as the product of an infinite series of ratios in a book of the mathematician John Wallis (the so called Wallis product for π in the Arithmetica infinitorum from 1655).

It reminds me of something…

The formula links π and the quantum mechanics. That’s a fact.

I recently read an article in french that talked of the tau manifesto, saying that the value of pi is wrong and should be 6.28…

Interestingly, if we use π = 2π then several classical formulas in mathematics and physics exhibits the same appearance:

Physics and mathematics are maybe two sides of the same coin…